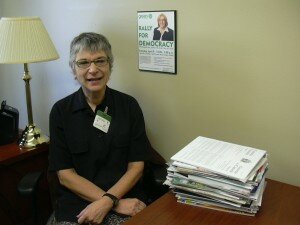 first day at my desk


House of Commons passes – VIA Rail round trips – Elizabeth’s office – Spunky …
On September 15, I arrived in Ottawa, to be a volunteer for Canada’s first Green M.P., Elizabeth May. Since then, I’ve seen – and heard – Question Period, been asked to leave a committee meeting, tasted some of The Hill’s comestibles, struggled with connectivity, and experienced a lot more.

Connectivity difficulties have delayed starting this blog. Smart ‘phones are used non-stop on The Hill, and M.P.s have Blackberries, so as soon as I arrived in Ottawa, I got one. And netbook, lighter in weight than a full-strength notebook, was my choice. I thought emailing and blogging would be easy. I was wrong.

Setting up one of my email accounts took the Fido folks several days, and I managed to do the second in just minutes. But my email disappeared on my first weekend trip back to Toronto, and restoring it, once I returned to Ottawa, was a real challenge for Fido. (It vanished again this weekend, re-appeared of itself after 24 hours – phew!)

In general, non-Hill computers can’t be online in Parliament buildings. My office desk has a cable on it, waiting for its Hill-system computer to be delivered – soon, we think. And so far, I’ve not been successful in connecting at home in Ottawa, and I’m not sure yet whether this will be an easy problem to solve or a hard one. My first trip back to Toronto, my netbook connected to the VIA system, but not this time.

Elizabeth’s office already has three computers online. Now that I’ve got my security pass, I can come in early and stay late, so I’m able to use one of those. Security passes are credit-card-sized plastic, on lanyards. A letter from Elizabeth’s office to the security office gets the process started. A security check follows – I don’t know exactly what that entails. My pass admits me to any of the Parliament buildings. Before that, photo i.d. from me, and a telephone call up to the office by the building’s security staff let me, and my backpack, through the scanners, and resulted in a visitor’s pass good for one day at a time.

The Confederation Building, on the northwest corner of Wellington and Bank Streets, houses a number of M.P.s’ offices, including Elizabeth’s. Her office consists of three bright rooms. One, with Elizabeth’s desk, and her chief of staff’s, has just enough space for a small sofa, too. A picture of Petra Kelly, who helped start the Green Party in Germany, is now over the sofa. My desk is in a room that comfortably holds three other desks, but could not hold more. Staffers and volunteers all watch our screens avidly, whenever Elizabeth speaks, in and out of Parliament, which she has been doing, amazingly often, to impressive effect. (Elizabeth’s blog, on the Green Party of Canada website, explains some of what she does.)

I’m honoured to be staying in Elizabeth’s apartment, in a historic building half an hour’s walk from the office. As soon as I arrived, I met Spunky. She’s a shih tzu, and has happily achieved the advanced age of twelve. For the first time in my life, I’m walking a dog. Dog people, I’ve learned, exchange the names of their charges when meeting on the street. But one lovely warm morning, at 3 a.m., when Spunky took me for a long brisk stroll, we had the whole block to ourselves.

Please check here for upcoming blogposts: Question Period and committee meeting(s), as mentioned above; food on and around The Hill; my OC Transpo and walking adventures – I’ll try to include whatever I see and do in Ottawa. And I’ll look forward to comments, here, on Facebook, and to my email, [email protected] 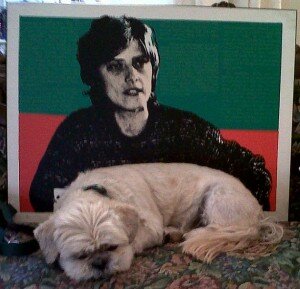 Spunky, before we brought Petra Kelly's picture to the office